Most British food lovers of a certain age will recall the tag line “don’t say vinegar say Sarsons” and I am among them.
Dripped over fish and chips still in their paper there is surely no better use for the brown malt liquor.
And as any allotment holder will tell you it is a vital preservative in making chutney and pickling onions, beetroot and other root vegetables.
Generations have used it to store fresh produce over the winter months – including eggs (many will have seen the giant jar of other worldly looking hard boiled eggs swimming in vinegar perched on a fish and chip shop counter).
But as with everything food it often falls to fashion to dictate the contents of our larder and after a few years as a preserve (pun intended) of the older generation pickles have become cool again.
In attempt to latch on to the trend Sarsons invited a group of journalists and bloggers to Rita’s for a brief lesson in pickling.
With a pickled ginger cocktail in hand it was soon clear how easy it is to get yourself if not into then in possession of a pickle. 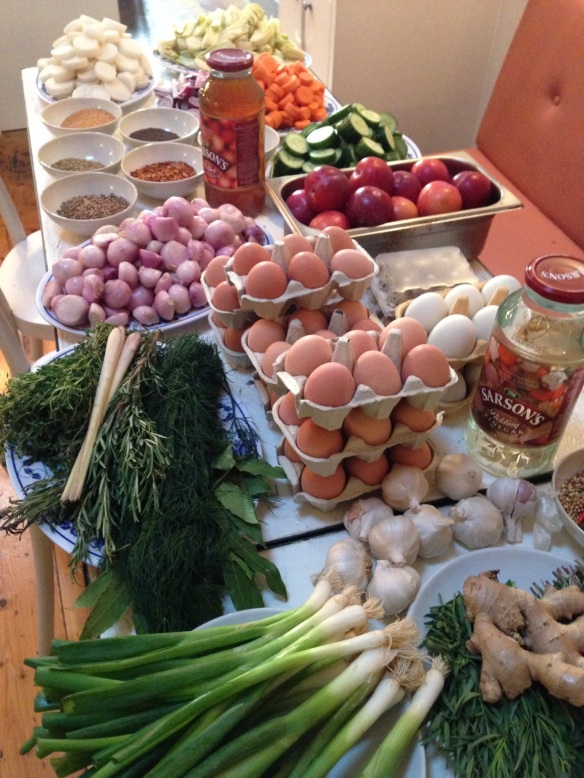 The expert in charge was archaeological expert and food enthusiast Peter Ginn, last seen on the BBC series Victorian Farm, and he explained the word vinegar comes from the French vinaigre meaning soured wine and that is exactly what it is.
Originally a way of storing a glut of fresh produce over winter in the same way salting, smoking, potting, canning and drying does it was the refrigerator which saw it fall out of fashion.
It’s coming back now though and places like Rita’s do their own sauerkraut and kimchi and it’s a nice way to express a love of home cooking craft.
Pickling is actually shocking simple, you need your vinegar, which must have a minimum of 5% acidity, your vegetables or fruit and a sterilised container like a kilner jar or old jam jar and lid.
You can sterilise by boiling in water or in a hot oven.
Then it’s easy, grab some of favourite herbs and spices add to the jar.
In our lesson there was red, black and white peppercorns, a variety of dried chillies, coriander, cumin and fennel seeds, dill, rosemary, tarragon and sage.
Next you fill with what you want to pickle (you’ll need to blanch onions or shallots and hard boil eggs) before pouring over enough vinegar to cover them trying not to let any poke above the liquid line.
You can try carrots, onions, eggs, mooli (japanese radish), cucumber, lemons, plums or anything your imagination allows.
Seal your jar and leave for three or four weeks and enjoy on their own or with cold meat and cheeses.
I’m very excited to see how mine turn out and am interested to try a more exotic pickle.
One Peter said he wants to try is so-called English bamboo – alder!
Apparently there is a recipe in the 200 year old cookbook A New System of Domestic Cookery – one for a dedicated pickle fan.